Throughout August and September of 2019, the newly-minted glass doors of the renovated lounges in Carman Hall were shattered. Some see the suspicious commonalities between the door destructions as a byproduct of poor construction and institutional incompetence. Others(typically cynical upperclassmen), noting that all the suspected culprits were first-years in their first week of college, point to the old adage "this is why we can't have nice things", and herald it as one of many examples in which first-years are destined to destroy anything of value on Columbia's campus(an argument that only gains exponentially in evidence every year).

During the Summer of 2019, renovation work was set to be completed on Floors 2-6 of Carman Hall. Among the additions of this renovation were completely refurbished lounge spaces on each floor. Each lounge was designed to be a sleek, open space where floor residents and their friends could congregate. Learning from their previous mistakes of making a lounge completely open-air(as it was in pre-renovated Carman), most notably how loud events in the lounge were disturbing residents searching for peace and quiet in their rooms, Columbia decided to wall-off its new lounges. In pursuit of a more modern atmosphere, as well as fearing that solid walls would be uninviting, Columbia (foolishly) decided to make the entrance way to each of these new lounges out of a wall of glass, with two large panels of sliding glass serving as a doorway. Completing the renovation in multiple phases, the work done in the Summer of 2019 would be a carbon copy of the work done a year earlier on Floors 7-13, where residents were well-pleased with the work being done.

Although this second phase of work was nearly identical to the first(and actually involved working on less rooms), a week our from first-year move-in and work was far from done. Paint cups and construction supplies still littered the floors of students moving in for pre-orientation program, dorm furniture was stacked high in the Carman basement, and work was still being done on the lounges. By the graces of Prezbo, work was completed in the nick of time. Perfectly willing to live in Hartley if it meant getting away from their parents, greasy first-years piled their metric tons of dorm decorations into blue bins and gleefully invaded Carman as the paint still dried. The lounges, however, were not as ready for this onslaught.

On the night of August 30, 2019, the left door of the lounge on Carman's Floor 4 was completely shattered, spilling glass across the lobby in front of elevators. The floor's lounge and elevator area was completely closed, but not before numerous snapchats and pictures were taken of the cobwebbed corpse of Columbia's latest renovation work.

Days later, a similar incident occurred in Carman's Floor 5. Although the glass doors to the lounge did not completely shatter, large cracks were evident. 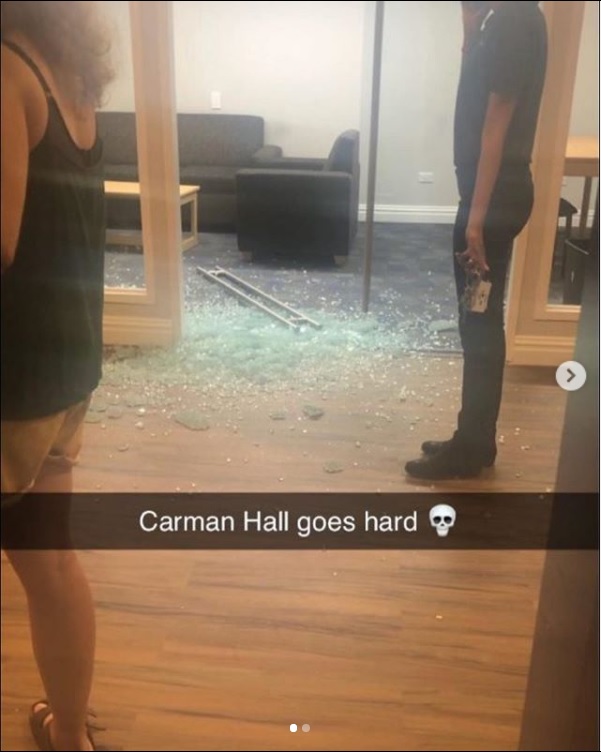 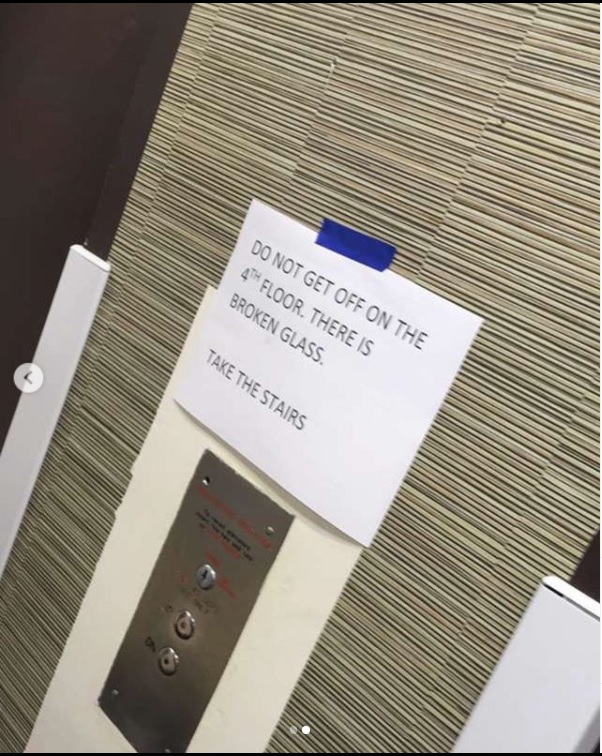 The visceral images of the destruction of the Floor 4 lounge circulated the Columbia mediaspace overnight. Soon followed speculation about the cause of the door's shattering, with outlets such as Columbia Barstool claiming the door to be just another tragic victim of Carman's violent party scene.

In an article in Bwog published on September 14, 2019, first-year student Reyna Choi confessed to shattering the Floor 4 door. Contrary to popular speculation that the doors were shattered in the name of the party, Choi claims that she shut the doors to stop the stench of vomit wafting out from the lounge. Choi claims there was nothing out of the ordinary as she tried to stop the smell, but upon closing the door, the left collided with the right and shattered [1].

Some speculate that a similar phenomenon was at play in the cracking of the Floor 5 doors: that the rubber piece intended to stop the left and right doors from colliding was defective or missing. This might suggest that in the hurry to get the newly renovated floors ready for first-year move-in day, a few key critical structural errors were made that led to the doors shattering. It is unknown whether any students were held financially liable, which might be Columbia's quiet confession of culpability.

Regardless of who was responsible, from that point on Carman's Floor 4 in the 2019-2020 would gain a (well-deserved?) reputation for being one of Carman's wilder floors.