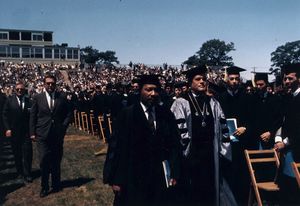 Clifford Lee Lord (September 4, 1912 - October 22, 1980) was a historian and the first official Dean of the School of General Studies. Prior to Lord, the heads of General Studies were designated as "director."

He received a BA from Amherst in 1933. During World War II, he served in the U.S. Navy as a Lieutenant Junior Grade in the Bureau of Aeronautics. After the war, Lord served as the Director of the Wisconsin Historical Society from 1946 to 1958. He was Dean of General Studies from 1958 until he became president of Hofstra in 1964.

Lord became the fourth president of Hofstra University in the fall of 1964. As president of Hofstra, Lord provided an honorary degree to Dr. Martin Luther King, Jr. in 1965, and he created the School of Business and the Law School. In 1972, Lord invited Columbia president William McGill to deliver the commencement address at Hofstra.