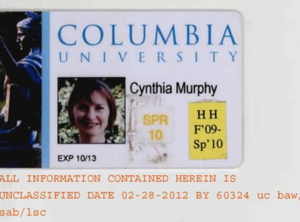 Cynthia A. Murphy, nee Cynthia A. Hopkins MBA '10 (real name unknown) was a Russian spy, until she was arrested in June just after her graduation. Her mission while at the Business School was to make connections with high profile professors who might themselves be connected to more influential people. She lived in "deep cover" in New Jersey, and extended Columbia's long tradition of harboring Russian spies into the 21st century.

To commemorate the incident, Bwog published some student artwork[2] of parody James Bond posters (though the second one appears to be based on the ubiquitous Anna Chapman rather than Murphy):