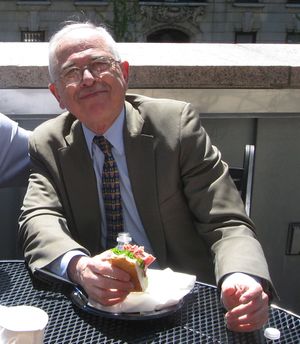 Gerald Sherwin or, as he is commonly known, Jerry Sherwin CC '55 is a famous alum who seems to attend every single Columbia event, ever. From 2000-2001, he was President of the Columbia College Alumni Association. He was also Chair of the Board of Friends of the Double Discovery Center and currently serves as Chair of Manhattan ARC as well as a University Senator on behalf of the alumni. He was a freshman (they were actually called "freshmen" back then) when Eisenhower was President (of Columbia), and he's also long been suspected of being a Sachem. He graduated with a concentration in "government and the humanities". Afterward, he managed the basketball team, and then went onto a career in advertising. If you go to more than 3 College events, you will probably meet him.