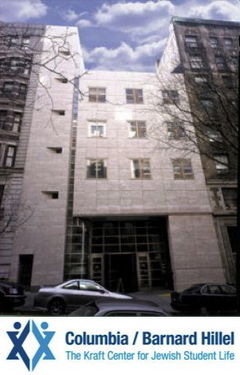 The Kraft Center for Jewish Life, home of Hillel

Columbia/Barnard Hillel is a student group that exists to promote Jewish life on campus. Hillel is in the Kraft Center on 115th & Broadway. There are 1,500 Columbia and Barnard students who are actively engaged in Jewish life on campus. Hillel sponsors a wide variety of programs; specific programmatic areas include: social, religious, cultural, social justice, educational, interfaith and Israel.

Acting as an umbrella for Jewish life under the Student Governing Board, Hillel is comprised of 26 constituent student groups and countless supplemental initiatives. One such initiative is Jewish Life Orientation (or JelLO) which takes place immediately after NSOP at the beginning of each Fall semester and includes programming intended to help incoming students find their place in the Jewish community. Hillel is also an active programming location during Senior Week at the end of each Spring semester.

In addition to weekly religious programming and holiday programming, Hillel has several unique events and initiatives. Every Fall semester, often in Low Library, the social/cultural committee sponsors Hillel Formal. This dance is co-sponsored by a multitude of campus groups and organizations. During finals each semester, Hillel hosts "Butler Smells, Come to Hillel." The Hillel building is transformed into a multiplicity of study spaces, from social to silent, with consistently replenished snacks and reservable group-study rooms.

In addition to food served by groups at their events, Hillel offers several dining options: Cafe Nana is a restaurant on the 2nd floor of Hillel open Sunday-Thursday that serves Middle Eastern and Italian fare. Kraft Shabbat Dinner is a weekly Shabbat dinner that takes place on the 5th floor of the Kraft Center every Friday. The heavily subsidized meal costs $5. Hewitt Shabbat Meals are coordinated by Hillel and provided by Barnard dining services. These traditional Friday dinners and Saturday lunches take place in Hewitt Dining Hall.