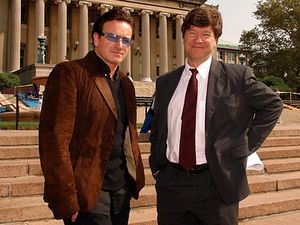 Jeffrey Sachs and his homeboy, U2 lead singer Bono

Jeffrey Sachs is a celebrity professor devoted to "sustainable development". He often appears with various superstars in publicity stunts in order to promote his do-gooder agenda. For example, he took a little holiday to Africa with Angelina Jolie. Dream job?

Officially the Quetelet Professor of Sustainable Development, Sachs heads up the Earth Institute, and holds teaching appointments with the Econ department, SIPA, and the Mailman School of Public Health.

He spends most of his time making the same argument as a Save the Children ad ("for just a few dollars, you can end poverty"), while living it up in the $8 million Upper West Side mansion Columbia bought to lure him from Harvard - when he's not taking potshots at his downtown rival, NYU prof William Easterly. He also does some shit for the UN.

Some students are so devoted to Sachs that they wear t-shirts proclaiming "Sustainable Development is Sexy". Also, The Bwog fancies him.