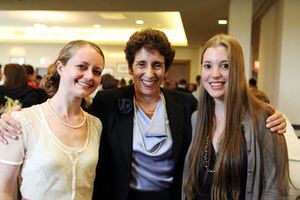 Kathryn Yatrakis PhD '81 is the Dean of Academic Affairs for Columbia College and the Associate Dean of Columbia College. She is also Assistant Vice-President for Academic Affairs for the Faculty of Arts & Sciences. Among her most important tasks is overseeing major advising. Prior to her appointment to the administration, in 1998, she was a Political Science professor at Barnard for twelve years.

Kathryn Yatrakis was born in Greece and is married to Peter Yatrakis CC '62, also born in Greece. Peter runs Granite International Management, a real estate company that specializes in distressed real estate. As a student, he was on the Columbia track team and was a member of St. Anthony Hall. They are parents of Columbia College students from the class of '94, '96 and '05. Peter received a Dean's pin for his service as a class agent. Their son Demetrios served as a class agent for the Columbia College Class of 2005. Demetrios also attended Columbia Business School with a concentration on real estate. Kathryn and Peter's daughter Maria was once on the Greek national Olympic soccer team, and was once an assistant soccer coach for Columbia.

Yatrakis received a Ph.D. from GSAS in 1981, and returned to become assistant professor in political science and the director of the Urban Studies Program.

Yatrakis was appointed by Columbia College Dean Robert Pollack to succeeded Michael Rosenthal as Associate Dean of Students of Columbia College in 1989. At the time of her appointment, she noted that she did not want to beat Rosenthal's twelve-year tenure, but as of the writing of this article, she was associate dean for twenty-four years. Prior to her appointment she served as the Barnard Faculty representative to the University Senate.

At Columbia, Yatrakis serves on many committees in her capacity as Dean of Academic Affairs, including the Columbia College Board of Visitors, the Provost's Advisory Committee on ROTC, the Faculty Advisory Board for CUarts. She was one of the people interviewed and credited in the McKinsey Arts and Sciences Report. [1]