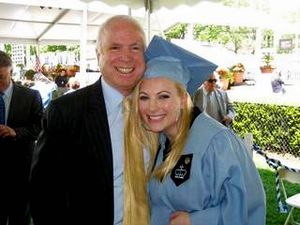 Meghan McCain and her dad at Columbia College Class Day, 2007

Meghan McCain CC '07 is the daughter of US Senator, 2008 presidential candidate, and 2006 Class Day speaker John McCain. She campaigned for her father as a "blogette". Since then, she has actively written for the Daily Beast, defended herself after being called fat, and become a high-profile user of Twitter, all of which culminated in the receipt of a high-six-figure advance on a new book "on the future of the Republican Party". Unbelievably, it will be her second publication; her first was a children's book about her father's life.

Meghan graduated from Columbia with a degree in art history, and spent time doing internships at Newsweek and Saturday Night Live. She reportedly loved HamDel.[1] At one point during her Columbia life, Meghan McCain lived in McBain. Heh?

She recalls that at Columbia, she was "around all these Mensa scholars", which apparently makes it just like The View.