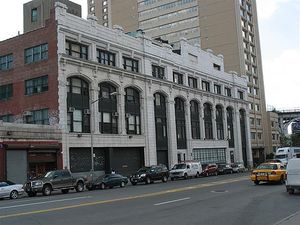 Prentis Hall in all its glory

Prentis Hall is a building owned by Columbia on the south side of 125th Street, just across from the planned Manhattanville campus. It was built in 1949 as a milk bottling plant, and acquired by Columbia not long thereafter. From the 1950s on, it has housed the Columbia-Princeton Electronic Music Center (now the Computer Music Center), which pioneered electronically synthesized music.

Prentis currently houses some School of the Arts and Music Department studios as well as the offices of the Arts Initiative. It is where the Center for Jazz Studies lives. Earlier, Columbia planned to dramatically expand Prentis to fully house the School of the Arts, but new, more conservative plans only call for the addition of an extra floor by 2015.

Until Manhattanville happens, Prentis currently has the dubious distinction of being officially considered part of the Morningside Heights campus even though it is half a mile away.