From WikiCU
(Redirected from Primal Scream)
Jump to: navigation, search 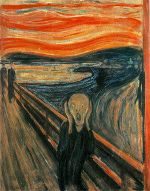 Primal scream is an end-of-semester tradition, not to be confused with the Scottish alternative rock group of the same name. It takes place at midnight on the last Sunday night of the semester, after the first Friday of exams and before the last week of final exams. Students come out of their studying holes, open their room windows, and release their stress with howls of anguish and frustration. The screaming lasts up to 5 minutes and can be heard throughout the campus. Primal screams are not unique to Columbia and are known to exist at other colleges.

The origins of the scream are unknown, but has been confirmed by neighborhood residents to date back at least to 1872 (edit: this is assuming it took a random hiatus between fall 1983 and spring 1987, since it did not in fact happen those years...)

Since 2006, the spring-semester primal scream has coincided with and signaled the beginning of the Spring Pillow Fight.

In 2005, NPR's Soterios Johnson CC '90 presented a brief piece on the event, including a recording of the screaming.[1]

During Fall 2010 to Spring 2014, the Primal Scream was actually a piece composed by Solomon Hoffman in which he successfully created a 5000 part harmony.