On December 18, 2011 the inaugural Puppy Study Break took place in John Jay and Furnald Lounges. The puppies have returned each following semester. Students' favorites include Mister Mattingly the "bro" boxer, the Golden Retriever siblings, and Boo the toy poodle in a French maid-esque outfit.

In Fall 2011, Carolyn Ruvkun, CC'13, Claire Duvallet, SEAS'13, Erik Nook, CC'12, and Yanyi Luo, CC'13 hatched a plot to bring puppies to Columbia during Finals Week. Meetings with administrators and bureaucratic hurdling ensued. The Puppy Coalition bestows kudos to Deans Terry Martinez and Cristen Kromm for sticking it to The Man/ The Office of Risk Management-- yes this really exists. 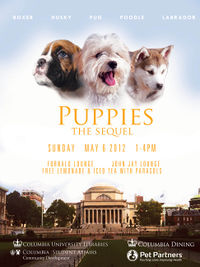 The Puppy Study Breaks are a collaboration between students and administrators. Financial support historically comes from a combination of sources: CCSC, Residential Programs, Dining Services, and Columbia Libraries.

The events take place at the end of every semester, during the weekend between reading week and finals. They usually happen in both Furnald and John Jay lounges for 2-3 hours in the afternoon.

The Puppy Coalition does not fall under ABC or SGB, and the students involved in planning the event do so because they love puppies and want to spread love and happiness.

In Fall 2011, many conversations about wellness sprouted up around campus, but little action was being taken. The founders of the Puppy Coalition recognized that puppies = love. More seriously, therapy dogs had been brought to other campuses and were eagerly received.

The first Puppy Study Break had over 1,000 RSVPs on the Facebook event. The New York Times featured the event in a slide show about how college students cope with stress during finals.

Columbia is known for being a bureaucratic clusterfuck. Dogs are formally prohibited from campus. Columbia administrators are often seen as unapproachable, distant, and cold. This event surmounted that stereotype: students worked directly with administrators, specifically Dean Terry Martinez and Dean Cristen Kromm. The Puppy Coalition approached these administrators in good faith, and with a familiarity cultivated by previous involvements on campus.

The name "Puppy Coalition" is tongue-in-cheek name as a reaction to the hyper-jargony seriousness of many other organizations on campus centered around wellness.