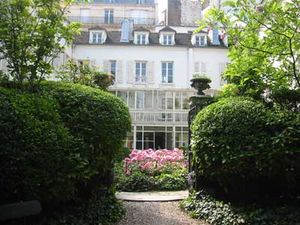 Reid Hall is Columbia's facility in Paris. Located in the Montparnasse district, it is home to Columbia's study abroad program in France, among other academic activities.

It's unclear how exactly the creation of CGC|E affects preexisting Columbia or other programming at Reid Hall, some of which was carried out jointly with Penn, other than adding another layer of bureaucracy. One casualty may have been the Reid Hall Institute for Scholars, which, according to its website, ceased activities in May 2010. The new center is, however, scheduled to be the locus of joint operations between the Mailman School of Public Health and its Paris counterpart.

Built in the mid-18th century as a porcelain factory, the complex that is now called Reid Hall has served since as France's first Protestant school, a club for American girls living and working in Paris, a World War I hospital, and, finally, a residential center for female students. At the time, it was owned by Elizabeth Mills Reid, whose daughter in law was a Barnard alum. Barnard Dean Virginia Gildersleeve signed on to support the project, alongside officials from Smith, Vassar, Wellesley, and Bryn Mawr. During World War II, the complex was briefly a refuge for Polish and Belgian students and academics, before being converted back into an academic center by Gildersleeve et al., this time for men and women.

Over time, it acquired a reputation for hosting lectures by influential intellectuals. Among those to have appeared there are Roland Barthes, Jacques Derrida, Simone de Beauvoir, and Gertrude Stein.