From WikiCU
(Redirected from Rowing)
Jump to: navigation, search 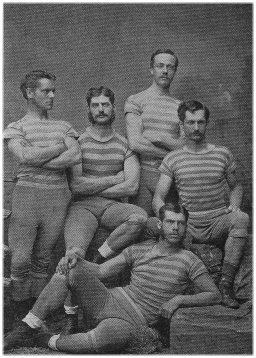 The 1878 crew team that won the Henley Regatta

Crew (or rowing) at Columbia consists of three distinct teams:

Crew has a long history at Columbia, with men's team originally being founded in 1873. In 1878 the "Columbia College Boat Club" became the first non-English team to win a race at the Henley Royal Regatta. The team last won a US national championship in 1929.

Columbia rowers won the Visitor's Challenge Cup at the prestigious Henley Royal Regatta on the Thames in 1878, the first time a non-English team had won a race on English waters.

Currently, the teams practice on the Harlem River. Why they moved their boathouse from the Hudson, nobody knows.