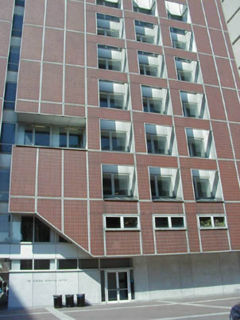 The Fairchild Center viewed from the south.

It was built in 1978, somewhat deliberately in front of the hideous Mudd Hall, largely masking the latter from view. The facade, by Mitchell/Giurgola, somewhat vaguely references the campus' historic brick McKim, Mead, and White architecture, or mocks it, depending on your perspective. It is a lesser known building, generally understood as "the brick thing in front of Mudd". On account of the large number of biological laboratories, the soupy smell of growth media wafts through many locations inside Fairchild.