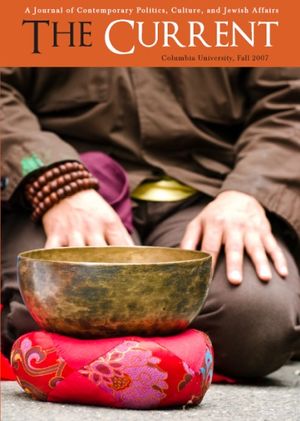 The Current is a journal of politics, culture and Jewish affairs. Founded by Bari Weiss and first printed in December 2005, The Current publishes essays on a broad range of subjects, with letters to the editor, an editorial, and book reviews appearing in each issue.

The Current's Spring 2007 issue was the first-ever Columbia publication to be printed in a 'green'--environmentally friendly--manner. The Current's paper is 100% Forest Stewardship Council certified, and 50% of it comes from recycled sources, of which 25% is post-consumer waste. Additionally, no chlorine or acids were used to bleach the paper or publish the journal.

The Current's work has been cited on blogs of The New Republic[1] and National Review[2] magazines, by Instapundit[3], the Volokh Conspiracy[4], and Minding the Campus.

The Current has conducted interviews with Mohammad Yunus[5], Stanley Fish[6], Myron Kolatch[7] and others. Its editorials have addressed issues such as university speech codes[8], controversial campus speakers[9], corporate divestment[10], humanitarian activism[11], the Saffron Revolution in Burma[12], and the history of the Student Struggle for Soviet Jewry[13].

Each issue, The Current publishes an editorial, multiple essays and reviews, and two special sections: "Boroughing," and "The End of the World." As described in the Spring 2007 issue, "Boroughing" was "created as a counterpart to the End of the World section, which has provided lighter fare since Issue One. Boroughing presents exciting snapshots of only-in-New-York moments from around the city and here on campus." [14]