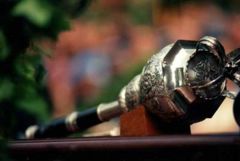 The eighteenth-century University Mace carried in the Columbia ceremonies was given to the University by the late Judge John Munro Woolsey, LL.B. 1901, LL.D. '29. It is of Sheffield plate, topped with a king's crown over a design of acanthus leaves[1]. Woolsey, a founding member of the Columbia Law Review, presented the Jacobean style mace to the University as a token of appreciation for the legal education he received at Columbia. He selected this particular mace because of the King's Crown atop it, making it, in his eyes, an ideal symbol for Columbia.

A mace is a medieval weapon of European origins that consists of a wooden club topped by a blunt or penetrating metal head. It is usually used to beat or bludgeon opponents (as opposed to a battleaxe or a sword, which is used to cut opponents) on the field of battle. With the advent of the firearm, maces are no longer used in battle. In legislatures, courts, and universities, however, a ceremonial mace is usually used to symbolize the authority of the body's officials.

In the style of the Roman fasces, which were carried by lictors preceding an official, a mace is usually carried by a mace-bearer in front of the President of Columbia University on ceremonial occasions. At Columbia, the mace specifically symbolizes the University President's power to confer degrees. As such, it is usually carried only during specific academic ceremonies, such as Convocation or Commencement, and the investiture of a new President.