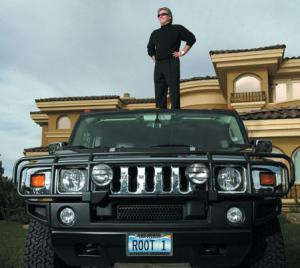 W.A.R. in his natural habitat

Wayne Allyn Root (a.k.a. W.A.R.) CC '83 is a millionaire businessman in Las Vegas. He ran as the Libertarian candidate for vice president in the 2008 election race.

The fact that he and Barack Obama were in the race together means 2008 is the first year in which two same-year graduates of the same college have participated in the same presidential election contest. Root expressed skepticism that Obama had attended Columbia at all, having never met him during his time there.

He has written a book, cleverly entitled Millionaire Republicans: Why Rich Republicans Get Rich, and was supposed to appear in a TV reality series, "Root for America", covering his candidacy.