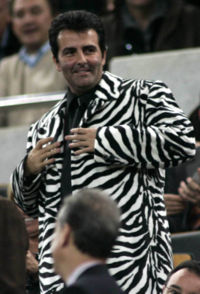 Xavier in one of his trademark crazy suits

Xavier Sala-i-Martin is an economics professor known for his whacky suits and genius in math and economics. One of the most-cited economists on the planet, but you'd never know it from the way he acts. Anyone who has taken a class with him quickly becomes familiar with his crazy website, which has to be seen to be believed.

His name is pronounced Cha-vee-ay, not Ha-vee-air. Not X-A-vier. And especially not "Professor X." Without a doubt, he will tell you this on the first day of class. As well as the fact that he is Catalan and not, he will insist, Spanish. 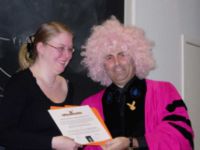 In his Macroeconomics class, he assigns one question each class as the "M&M Challenge" question. A correct answer in front of the entire class earns the student a bag of M&M's after class, a listing on the M&M Board of Honor, and a point in the semester's M&M Peanut Minute competition. At the end of the semester, the student with the most points is given a big jar of peanut M&M's and a certificate of honor from Xavier, who dresses even crazier than usual for the "award ceremony".