From WikiCU
(Redirected from Yankees)
Jump to: navigation, search 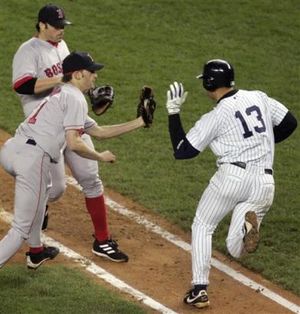 Even moral relativists agree: the Yankees are categorically evil.

The New York Yankees are the most overrated major league franchise of any sport in the world. Fans of the Yankees, among the most arrogant and insufferable people you'll ever have the misfortune of encountering, will often justify their boastful pride by citing the 27 World Series Championships won by the team, despite their likely not having been alive for more than 5. Tragically, pointing out that only 9 of those titles have been won in the 50 years of the expansion era (1961 to present), and other less than glorious facts do little to put these cretins in place.

The Yankees can be seen as a microcosm of white-collar New York City (and, perhaps, Columbia University); flagrant extravagance, unbridled arrogance, extreme self-assurance, and the drive to win at all costs define the franchise.

As of 2010, it appears that, like their fanbase and natural allies in finance, their spending has caught up to them. The newly opened Yankee Stadium has not sold out a single game, including Opening Day 2009, thanks to exorbitant ticket prices.

The Yankees' location in New York mean that they are subject to 24-7 coverage by ESPN. As a result, if we were to rank the epicness of sports rivalries by ESPN coverage, "Joba's dad vs. Health" would make the top 10 of any list.

The Yankees maintain a long-standing rivalry with the Boston Red Sox. Until 2004 the rivalry had been one sided, mostly marked by improbable Yankee triumph after Yankee triumph (Bucky Dent, Aaron Boone, etc.), when the Red Sox inflicted the worst post-season collapse in baseball history on the Yankees by becoming the first team to ever win a best-of-7 series after falling behind 3 games to none. The rivalry is significantly magnified on campus thanks to the presence of a substantial number of New Englanders in the student population.