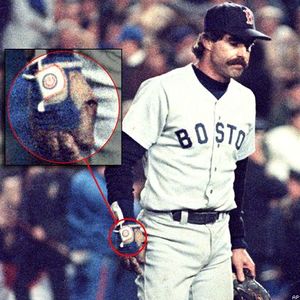 The Boston Red Sox are a Major League Baseball franchise based in Boston, Massachusetts. They have a famous rivalry with the New York Yankees, although until recently the Boston club was New York City's bitch.

Generally speaking, it is safe to wear Red Sox merchandise in New York. Just don't be stupid. It's usually the Red Sox fans that make a point of raising trouble anyways. The place one absolutely must not wear Sox gear is at Yankee Stadium, where ejection from the arena is almost guaranteed. Usually, this is done for one's own safety.

The Red Sox are known for a fan base bloated by bandwagoners, a history of institutional racism (they were the last MLB team to integrate in 1960), and 24-7 coverage by ESPN.