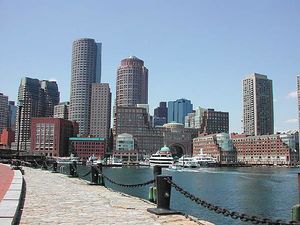 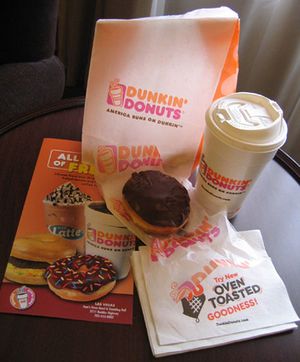 Unlike New York, which gives its residents a fairly cosmopolitan cuisine, New England offers only donuts and Joe.

Boston is probably the most exciting city on the East Coast after New York, but that's not saying much. Columbia's admissions officer for the region actually refers to the city as "that little New England fishing village". New Yorkers visiting are advised to be leery of the city's notoriously barbaric baseball fans - and to carefully research nightlife options, lest they find themselves stuck in a ubiquitous Irish pub (one could be mistaken for thinking that Bostonians subsist entirely on a diet of Sam Adams beer and Dunkin' Donuts, which is even more proliferous here as Duane Reade is in New York).

Across the Charles River is ultra-academic Cambridge, nest of some insidious Columbia rivals.

Boston is supposedly important to early American history. Supposedly. As such, it has a few more buildings that look like Fraunces Tavern than New York does. Since Boston was founded by boring Puritans, a fact with devastating implications for Boston's social scene to this day, they tended not to be taverns.

Between then and 2013, when the Boston Marathon bombings happened, not much went on in Boston. Mostly what happened was this: the Red Sox lost quite a few games, earned the sympathy of millions, started winning again, and lost their sympathy not long after.

Also, practically all of Ireland moved there, making it a wicked horrible place to be on St. Patrick's Day.

A one-way bus trip generally takes about 4 hours, but it could easily be more if there is traffic in or between New York and Boston. All buses make only one food/toilet stop, usually at McDonald's or Burger King. The Boston stop is at South Station.

Amtrak is expensive ($60 to $140, depending on whether one takes the high-speed Acela or the Regional, and depending on the class of one's ticket), but it has its advantages over the buses:

The train takes about three and a half to four hours, depending, again, on whether one takes the Acela or the Regional. It leaves from Penn Station; take the 1/2/3 to 34th Street/Penn Station. The two central Boston stops are Back Bay and South Station.

Some crazy people still think it's worth it to fly between Boston and New York, despite the fact that the line for airport security will probably be longer than the flight itself. The expensive shuttle flights leave from LaGuardia Airport, which one can reach via the M60 bus - or an overpriced taxi.

There is no order to Boston's streets. It's best to just get drunk and stumble around - this is the way Boston's colonial government laid out the city's road network to begin with.

The Boston's subway is known colloquially as "the T". Subway rides cost $1.70 and buses $1.25 if you buy a CharlieCard, and includes a free bus transfer. Most out-of-towners, however, buy cheaper CharlieTickets, which price subway rides at $2.00 and buses at $1.50. Note that the T does not run 24 hours; it runs roughly from 5:00 AM to 12:30AM. This would be a serious buzzkill if Boston's bars were open more than an hour and a half after that.

Boston consists of bahnies and townies. Bahnies go to the univuhsities and ah wicked smaht. Townies keep it real in the neighbah-hoods. How you like them apples?

1000% of Bostonians identify as Red Sox fans. The remainder are no longer considered Bostonians.

Boston is primarily known for its institutions of higher education, notwithstanding the fact that New York has a greater number and a comparable percentage of students in its population. This is possibly because of the fact that there is nothing else of value and worth in Boston (except for maybe the museums owned by the universities...and maybe the hospitals owned by them, too).

Some universities you may have heard of:

Mouth-frothing Red Sox fans. But since it's almost impossible to avoid these people, it's best to just not go.