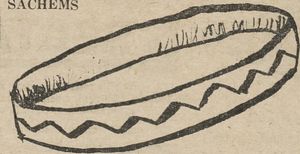 The Sachems are a Senior Society. They appear to be incorporated as a not-for-profit society under the laws of the Province of Nova Scotia. The Sachems were founded in 1913.

They were responsible for the Lerner Hall prank of Spring 2005, when the ramps were decorated with saffron sheets to mimic Cristo's installation of "The Gates" in Central Park.

Roger Lehecka was a Sachem, and later advised the group as Dean of Students.

They "initiate their members with a champagne party." Membership often confers benefits after graduation:

"I was able to obtain an interview at a particular bank because a Sachem alumnus works there," said a leader of the Sachems, 22-year-old Jaques F. Augustin of Brooklyn.[2]