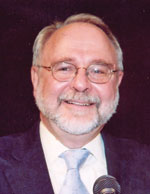 Roger Lehecka '67CC '74TC is a former Dean of Students of Columbia College. He served for almost two decades in the position before it was combined with the same position in SEAS to form the Division of Student Affairs in 1998. After stepping down from the position, he headed up the task force that planned the Columbia 250 celebration. He retired from the university in 2005.

Lehecka was a beloved and highly influential Dean of Students. He spearheaded the initiative that made Columbia a co-ed institution. He worked with students of color to establish the Intercultural Resource Center. He created the first-year dorms system. He is nearly universally admired as an administrator, and despite his "retirement," he still commands a sizeable amount of influence and respect at Columbia.

During his time as a undergrad, Lehecka founded the Double Discovery Center, an major tutoring and mentoring organization for disadvantaged students in local New York communities that now occupies much of Lerner's third floor.

True to his passion about higher education, Lehecka currently teaches a class on Equity and Higher Education in the American Studies Department. He mentors a huge number of students to this day. He has a daughter in Columbia's Class of 2013.