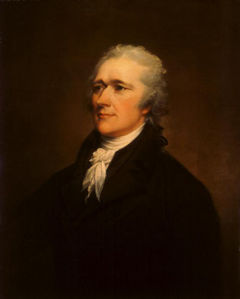 Alexander Hamilton was a Founding Father of the United States. He also failed to graduate from Columbia's predecessor, King's College, over 220 years ago. It wasn't his fault. While many maintain Hamilton was a dropout, he only left because the school closed during the Revolutionary War. He remains one of the most famous people ever associated with the school - even though he never got a degree, and the school wasn't even called Columbia at the time.

A misguided young Hamilton was originally interested in attending Princeton (then hideously named the "College of New Jersey"), but was rejected. When he became a general during the Revolutionary War, he famously ordered a cannonball fired at Princeton's Nassau Hall when a battle was taking place on the college's campus.

A proud pseudo-alumnus, Hamilton was instrumental, with John Jay, in reinstating King's as Columbia College in less than a year after British troops departed New York at the end of the war. Several years later, he employed shrewd legal maneuvers to wrest Columbia from state control, placing the college under the control of a private Board partly led by himself.

Hamilton Hall is named after him, and that statue outside Hamilton, yeah, that's him too. The Alexander Hamilton Medal is given in his honor, and the Law School's full tuition scholarship is named after him. You might have also seen him featured on the $10 bill. Oh, and he was murdered in cold blood by the sinister Aaron Burr, who happened to be a graduate of darkest Princeton. Sadly, Burr inflicted a wound so deep and vile that not even Columbia medicine prof David Hosack could save Hamilton's life.

His son, James Hamilton, also attended Columbia, and was an early member of the Philolexian Society.