He arrived in Morningside Heights as a Columbia College freshman in the fall of 1981. He graduated in 1985 with a B.A. in economics. A rowing recruit from Simsbury high school, he rowed lightweight crew in college for all four years and earning a Varsity letter. He was named co-captain in his senior year.

History as an Administrator

In 1987 Charlow returned to Columbia as the freshman lightweight crew coach, a position he retained for three years. In his first season he led the Frosh Lights to an impressive 5-3 record, including the first Columbia rowing victory over Yale in fifteen years.

In 1988, Charlow accepted a second CU assignment as an admissions officer for the School of Engineering and Applied Science where he worked for two years while concurrently coaching crew.

After a year in the private sector, Charlow once again returned to alma mater as Associate Director of Student Financial Services where he was a key member of the management team that restructured the Bursar’s office, significantly improving student service. While in this role, he also managed the financial aid services operation that supported the School of the Arts, the School of Architecture, the School of Journalism, the graduate portion of SEAS, and the School of General Studies.

In 1994, Charlow was asked by the Provost to take on a special assignment as interim Director in the office of Undergraduate Financial Aid. This office, which served Columbia College and the undergraduate portion of SEAS, was running a multi-million dollar deficit and in a total state of disarray. After restructuring the office and eliminating the deficit, Charlow was named the permanent Director in 1995.

Charlow was Executive Director of Financial Aid for twelve years and served concurrently as Associate Dean of Student Affairs for seven years. He served on many important committees and was a key member of the team that created and implemented the strategic plan for Admissions, which launched Columbia’s impressive rise in applications.

As the Senior Associate Dean in Division of Student Affairs he provided senior level management in many areas including the offices of Admissions and Financial Aid, the Academic Advising Centers, Pre-Professional Advising, Residential Programs, Student Development and Activities, and Student Success Programs.

In 2007 Charlow was investigated by the New York State Attorney General for conflict of interest when it was reported that he owned stock from 2002-05 in one of the four educational loan companies that his office recommended on a preferred lender list [1]. He had purchased stock at face value in ELG, a small student loan start up company that did not at the time market any loans through university financial aid offices. Shortly thereafter however, ELG absorbed the student loan division from American Express, a longtime preferred lender at Columbia, and created a new entity named Student Loan Xpress.

When Student Loan Xpress offered Columbia borrowers a very significant 2% interest rate reduction on Parent PLUS loans, they were placed on the preferred lender list for PLUS loans only. The following year, when they offered competitive terms for student loans, they were placed on the preferred list for Stafford loans. Before placing Student Loan Xpress on the preferred lender list Charlow disclosed upfront that he owned ELG stock to both his supervisor and to another senior university official involved in overseeing the preferred lender process. The published preferred lender lists for the years 2002-2007 clearly show that the lender (Student Loan Xpress) consistently offered Columbia borrowers highly competitive terms and in most years provided the best borrower benefits. Although the University stated repeatedly that no borrowers were negatively affected, Charlow was let go in the summer of 2007. Eventually, an exhaustive New York State investigation of Charlow was quietly ended with no charges being filed and no penalties assessed.

Charlow remains an active alumnus. In 2010 the crew program christened a shell in his name. 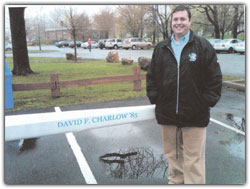