Difference between revisions of "Madonna Constantine" 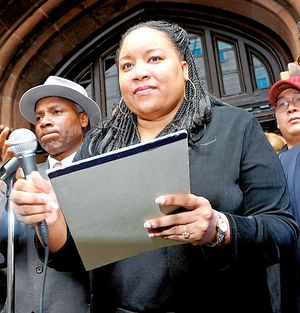 Madonna Constantine is a professor of psychology and education at Teachers College. Constantine joined the faculty in 1998, earned tenure in 2001, and became a full professor in 2003. She is notable for her involvement in two scandals.

The first was the hanging of a noose on her office door in fall 2007. As Constantine is black, this incident was widely viewed as a hate crime.

Constantine's later involvement in the plagiarism incident (see below) caused many to wonder whether or not she or a colleague was involved in precipitating the earlier noose incident. A grand jury has been convened and has requested information pertinent to a potential indictment.[1]

In 2008, Constantine gained further attention after an investigation determined she had been plagiarizing others' scholarship for some time. The investigation was conducted by Hughes Hubbard, an outside law firm, in order not to expose the university to liability. In response, Constantine fired off an angry email, claiming that TC was attempting to force her off the faculty. In the end, she was not fired, because she has a tenured position. She did, however, receive an undisclosed punishment.

Later, it was revealed that she had been suspended from TC indefinitely pending dismissal[2], after the investigation had proven claims of plagiarism true.[3]