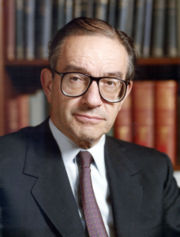 Alan Greenspan is the former Chairman of the Board of Governors of the Federal Reserve System. After receiving his B.S. (1948) and M.A. (1950) in Economics at NYU, he realised he made a horrible mistake and enrolled in the Ph.D. program at Columbia University. After a year, he realised he made an even worse mistake, and returned to NYU, where, after a few years of poking around and not writing a dissertation, NYU decided to give him a Ph.D. anyway in 1977.

Following the receipt of his degree, Greenspan took a few years off to, among other things, consult on Social Security, and chair the Board of Governors of the Federal Reserve, before finally settling on the preferred career path of most Columbia economics students: he joined an investment bank.[1]