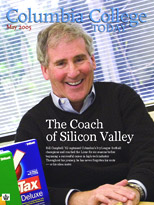 William Campbell on the cover of CCT

William Campbell, CC '62, is the current Co-Chair of the Trustees of Columbia University, succeeding David J. Stern, and succeeded by Jonathan Schiller. Campbell also coached the football team. He was CEO of Intuit. He passed away on April 18th, 2016 after a long bout with cancer.

In 2007 he pledged $10 million to kick off the public phase of the Columbia Campaign for Athletics.[1] The Campbell Sports Center is named for him.