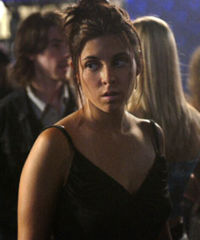 Meadow Soprano is a fictional character on the HBO series The Sopranos played by Jamie Lynn Sigler. She is admitted off the Columbia College waitlist. After completing her first year earning 24 credits as a C-level student, Meadow considers taking a year off. Just before the fall semester, however, she decides to enroll in Morality, Self, and Society (PHIL BC1005).

When she returns to Columbia, Meadow moves into an apartment off campus with a collection of high profile and intellectually astute roommates, including the Princess of Spain, who is presumably also a fictitious Columbia student.

Later in the show, Meadow dates Finn DeTrolio, portrayed as a student in the College of Dental Medicine.