From WikiCU
(Redirected from Potluck house)
Jump to: navigation, search 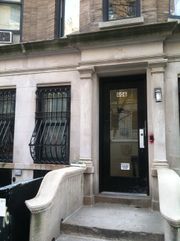 Potluck House (known on official less fun documents as Symposium House) is a special interest community of students who support a more open and welcoming campus.

That's the official line, anyway. Actually, Potluck is a home, a community, a space, and a network that thrives on filling in the perceived lack of such things at Columbia. Yet far more than defining itself negatively, Potluck is a creative space that contributes new ideas and works to positively add to the possibilities of life in and around campus. A significant part of its residents are self-styled Holden Caulfields, and the rest are phonies.

The below is an excerpt from a 2006 Potluck email planning "an anarchist disorientation parade" that should give you a flavor of the place:

and more COLORS and also we are rocket ships!!!

further, Columbia University attempts to instill a rigidity and normality and a general institutionality which hates UPSET!!!

and so! there will occur an anarchist disorientation parade full of spectacle, sound, color, dancing this saturday at midnight!! at the Columbia Lion (near mathematics and the gym!!) it’s like a subway party, but not on a subway, but still so so so beautiful…bring all the new columbians you know, bring your NOISEMAKERS and COLORS and LOUD VOICES[2]

It is located on 606 W 114th Street, and you can come visit most every Friday during the academic calendar at 8 pm. Bring food and friends.