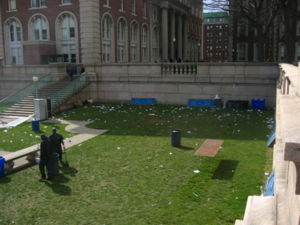 40s on 40 (officially known for a period as 40 Days) is an annual event for seniors that took place 40 days before graduation. The event began informally, was co-opted by the Columbia administration, and, although no longer officially supported or tolerated, continues as an underground tradition.

Starting sometime in the early 2000s, seniors would gather on Low Steps to enjoy the spring weather and down 40s exactly 40 days before graduation. The event continued as an underground, organic event for several years in this tradition. However, in many cases, the large crowd of seniors drinking on the Steps would draw the attention of Public Safety, who would break up the event.

In 2007, CCSC surreptitiously attempted to get the administration to place extra trash bins on Low Steps since students typically left a mess after the event, usually leading to a scolding staff editorial from the Spectator. The administration responded to the request by co-opting the event, clearly pursuing the classic Microsoft strategy of "co-opt and destroy". The new, official event was given the more salubrious title 40 Days. Informal drinking on the steps was replaced with a per-student limit of four beers, a penned-off student enclosure, ID checks, and a ban on bringing in any sort of container or bag which - heaven forfend - a student might use to smuggle in alcohol. In their cattle-like enclosure, administrators tried to tempt students with offers of free T-shirts and stickers. Rumor had it that the administration even booked a clown for entertainment, and there'd be a coloring-in contest too![1]

In a sense it was generous of the university to start sponsoring a drinking party, but most would agree the event became a pale shadow of what it used to be. To sum up, as of 2007, 40 Days became a lame, tame, roped and fenced-off boozefest.

In 2009, administrators decided that they could no longer support an event whose primary draw was the consumption of alcohol. Administrators did not comment on the fact that event hadn't been sponsored by them until 2007. Nor did they have anything to say about Lerner Pub or that fact that students more or less only go to Baker Field for football games because Athletics offers them free beer.[2]

In 2010, the CC & SEAS Senior Class Councils decided to kill off the official university-sponsored event because most of the cost of the event went into constructing a fenced off zone for alcohol consumption, rather than to actually providing fun for students.[3]

Demonstrating that they had successfully internalized the lessons of subalternism, students protesting the co-opted and eventually canceled event continued to hold the tradition informally, gathering on Low Steps and enduring harassment from Public Safety. In 2012 the unofficial 40s on 40 was held at 2AM.[4]

Lament for the previous incarnation of 40 Days

Man everywhere is free, and yet he lives in chains. One day, one single day, out of every grinding year we have a chance to do the Greeks we've etched into our edifaces proud and have our own Symposium on the steps. Our libations flow and for one sweet, ephemerally passing moment, we do something that is so rare and precious that we seek it like platinum and should guard it like a diamond - we have fun.

Well today, the eternal enemy, the powers that be, have decided to flew their muscles of control. No one is hurt, no one has problems, and still they must reach their iron fists into our cradles of tradition and rob a little child that I call "fun." They come as they always come, with the "law" and the "power" on their side. They come with the police, with the guns, with the endowments, with the 200+ years of history, and they come, my friends, for me and for you.

Now we know for whom the bell tolls.

And what will the administration do with my beloved little "fun?" They will toss it on the trash heap, with the rest of the things they have no use for but cannot stand anyone else in the world having. They will fight us ravenously because they know no other way. They are the GIANTS. we are meek.

But despite all their advantages, and all our meekness, shall we surrender? Does might make right or can we stop them? Our brothers who marched on Washington all those years ago, did they gain nothing? When Gandhi went to the sea and made salt did he use it to flavor his vegetables? No! He used it to toss the British from India!

We do not need their power, their right, their history, their might. We need only to march together, to be unified in truth, to be unafraid.

I will not lie friends. We stand now in a great darkness. Surrender if you must, but I will go foward, a majority of one, standing against the implaccable forces of the universe. I will refuse to go gently into that good night.

And friends, sweet, loving friends, I beg you to join me. You have nothing to lose but your chains, and nothing to gain but equality. Rise up! Grab the 40! Tilt it backwards and bring the frothy fullness to your lips, letting the cool suds of freedom wash down your oppression parched throat.

Yes they may arrest us. Yes they may shatter our bottles and splatter our beer on the cold stony steps of their institution. They may knock the bottles from our hands, spraying the cool liquid on Alma, letting the alcohol drip down her face like so many tears at the unjustice of it all. They may do all this and worse. But if they do, and I hope they do strike us down, we will become more powerful than they can ever imagine.

There are far more of us than them, and we do not need to loose our wroth for them to feel the disapproval of the countless billions. We do not need violence to defeat them. We need merely to try and drink our beers. In failing we shall succeed, and in succeeding we shall reach unheard levels of truth.

So I call to you, friend of friends, lover of life, giver of hope. You, individual, the one who knows what is right and will do what needs to be done. You, beautiful soul, who can lift the 40, who can get krunk, who knows what life really is. I call on you. Come forth, come outside! Awaken the sleeper! Breath the air of a better tomorrow! Remake the world how we know it should be, not how it is!

For fairness! For freedom! For 40s!