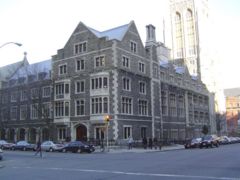 80 Claremont is a 5-story building on the southwest corner of Union Theological Seminary's quadrangle on 120th Street between Broadway and Claremont Avenue. The building was constructed in the Gothic style. Columbia took possession of the building through a 99 year lease in 2005 following $4 million in renovations as part of a short-term expansion plan that also includes the lease of Knox Hall.

80 Claremont is home to the Religion Department and Science and Technology Ventures. Religion gained 70 percent more space than it had in Kent Hall, while EALAC and MEALAC expanded into the vacated space in Kent.