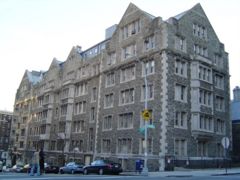 Knox Hall is a building on the north end of Union Theological Seminary's quad on 122nd Street between Broadway and Claremont avenues. In September 2004 Columbia took possession of Knox Hall as part of a 99 year lease along with 80 Claremont.

Formerly a residence hall for faculty and students at UTS, Knox is being renovated in order to become home of the Economics Department and Sociology Department. The move will increase Econ's space by 30 percent, and Sociology by 40 percent.

The Political Science Department will be able to expand by 20 percent by taking over most of the space left by Econ in IAB, with SIPA taking the rest. The History Department will gain 30 percent more space, and GSAPP new studios and offices in Fayerweather Hall by Sociology's move.

Renovations of Knox Hall include the drilling of four 2,000 feet deep geothermal wells that will reduce the energy consumption of the building by 50 to 60 percent.[1]