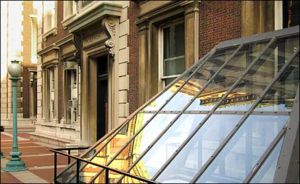 Fayerweather Hall. The skylight in the foreground pours light into the subterranean Brownie's Cafe 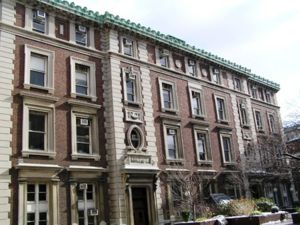 Fayerweather Hall is a decaying old building that hasn't been renovated in decades.

Fayerweather's vintage interiors, which look and feel exactly like what you'd expect an old Ivy League school academic building to look and feel like, if Ivy League schools didn't have the money to renovate them, hold captive the History and Sociology Departments. Walking around the sixth floor and discerning, in the dim hall lights, the nameplates of world famous historians on office doors, is enough to leave most history students awestruck. The offices themselves are often worlds away from the grimness of the halls - they feature soaring ceilings and, sometimes, sumptuous decorations. Eric Foner and Mark Mazower's offices are particularly fine.

The building's nether-regions hold some studios of the Architecture School, as well as bathrooms with what seem like their original, 19th century stalls. The basement actually links to Brownie's Cafe, a subterranean, cash-only grad student and architecture prof haunt that itself links to Avery Hall.

The building was erected in 1897, designed by McKim, Mead, and White, and named after Daniel B. Fayerweather, a wealthy shoe manufacturer who had no connection whatsoever to Columbia, but decided to give a few hundred thousand dollars anyway.

During the 1968 protests Fayerweather was occupied by students. They even held a wedding during the course of the occupation.

Interestingly enough, the building originally housed the Physics Department before it moved into bigger digs in Pupin Physics Laboratories.

The last time it was touched was the 1980s, when the large lecture room on the third floor (the entry level from campus) was repainted, barely, for a film shoot.

The Fayerweather ventilation shaft brings air into Fayerweather. It is dark, and there are pieces of dirt in the bottom of it. It is approximately three feet tall. It leads in the direction of the Old powerhouse out of the bottom Fayerweather, but it could easily go to Low Library or Avery Hall. To find the shaft, root around in the Fayerweather basement until you find, in a back corner, an air duct opening that says "DANGER OPEN SHAFT". Inside you will find a pipe leading down. It's a vertical drop down of about 5-7 feet. Once you get down it levels out, and heads out for a long way. Where it goes is anyone's guess, but it does seem to go on for a considerable distance, and it may branch out. A similar, but inaccessible shaft exists in the old mental institution tunnels, which might possibly be part of the same system.