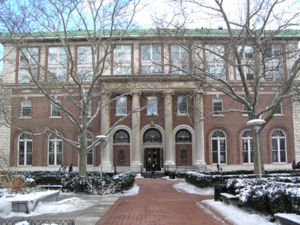 Avery Hall is the building that houses the Graduate School of Architecture. In it, you'll find Avery Library, which is Columbia's architecture and fine arts library, and the Wallach Study Center, which holds many rare blueprints. Avery also contains Brownie's Cafe.

Avery holds the distinction of being one of the rare instances when a University's architecture school is housed in one of its more beautiful buildings rather than in one of its ugliest.

A building mirroring Avery, Pierce Hall, was once planned for the opposite side of campus, but never built. The library has almost zero garbages outside of the bathrooms.

In the 100 level stacks of the library, go to the east end, where the over-sized folios are held. There are locked double doors that lead into a secret holding facility for books, which is physically under Fayerweather Hall.

The Avery Library is named for Henry Ogden Avery, one of late nineteenth century New York's promising young architects and a friend of William Robert Ware, who founded the Department of Architecture at Columbia in 1881. In 1897 Avery Library moved from an alcove in the 49th Street library building into a new wing in Low Memorial Library on the Morningside Heights campus. In 1912 it became the first library to abandon its quarters in Low for its own building, Avery Hall, a new Renaissance building by McKim, Mead, and White. This final home of Avery Library was the gift of Samuel Putnam Avery II, son of the original donor.

Go down to the cafe in the lower level by using the spiral staircase at the entrance. Walk to the southeast corner and you will find a scummy walkway behind the elevator and snack machines. At the south end there are black double doors and another door near it that lead into a machine room, on the other side of which is the connection to St. Paul's and beyond to Philosophy, Kent, and Hamilton. There are no alarms or cameras. The double doors might be locked though, but they can be unlocked. Also they are sometimes left open by maintenance. Watch out because it's in a relatively trafficked area which is next to maintenance area used nearly 24/7. You shouldn't have many problems though. In an extreme case you can lift up the grate near the door and crawl through the foundation tunnel and pop up on the other side (not recommended).

All doors are alarmed as fire exits, except the north door from the 200 stacks, which is mag locked with a swipe. Go down to the cafe in the lower level by using the spiral staircase at the entrance. Walk to the southeast corner and you will find a scummy walkway behind the elevator and snack machines. At the north end you will end up in a machine room. Make your way to the north end, where you will find a half-height door. This door does not go to Schermerhorn. Instead, it exits into a hallway from the double doors near the food window of the cafe, and it leads to fire-alarmed double doors to the street. In all cases, the stacks separate the two buildings, and to prevent book theft, the four or so doors from the stacks to Schermerhorn are alarmed. To the best of my knowledge, it is unaccessible.

Go down to the cafe in the lower level by using the spiral staircase at the entrance. On the east side there is a staircase that leads up into Fayerweather, or you can use the elevator or the other staircase behind the elevator. Access here is legit. The only difficulty is that it might be closed late at night. No cameras or security, except on some doors that don't go to the tunnels. Nothing to worry about here.

Entrance unknown, most likely walled off if it actually exists. There is a possible connection to the Buell/Kent/Uris/Low/Avery steam system. You can't access it from the Kent-Buell tunnel, which is the only known accessible section.