The Blue and White

From WikiCU
(Redirected from B&W)
Jump to: navigation, search

See also Wikipedia's article about "The Blue and White". 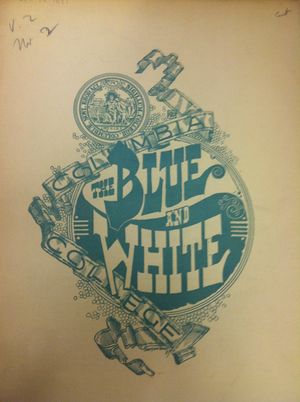 The cover of an 1891 issue of the magazine

The Blue and White is an undergraduate magazine. The magazine is an outlet for intellectual and political discussion, literary publication, and general parody. It has recently begun to foray into in-depth pieces on campus life and politics. True to its name, the magazine is printed in blue ink on white paper.

Among its popular features are designations of Campus Characters, snippets of campus gossip, "Digitalia Columbiana" (pieces of absurd writing culled from campus computers) and columns by Verily Veritas, an extremely pretentious fictional Columbia student. It is also known for its exclusive use of hand-drawn illustrations.

They are both blue and white, but mostly white.

The current editor in chief is Channing Prend. 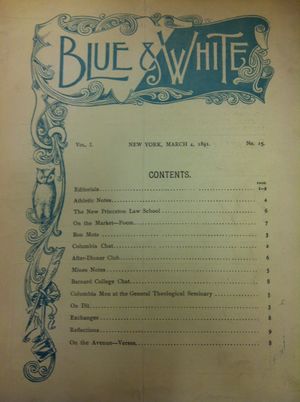 The table of contents of an 1890 issue of the magazine

The Blue and White was founded in 1890. It disbanded for unknown reasons in 1893.

In 1998, a handful of undergraduates revived the journal based on the original format. The staff has since grown to several dozen writers and contributors. In 2005, the magazine switched to monthly editions, affirming its presence on the campus. Recently, the magazine has focused more on pieces of "hard" journalism, in contradistinction to its former, less serious, and more literary character.

The staff of The Blue and White meets in the crypt of St Paul's Chapel. Meetings are inaugurated with a bizarre ritual known as "pokey", in which two staffers grab each others' hands and attempt to poke one another with their index fingers.

In 2006, The Blue and White established Bwog, a blog counterpart to the magazine. Bwog publishes gossip and other Columbia news around the clock.