The Donald is upset Columbia ditched this site for Manhattanville

Columbia Prime is the name given by real estate mogul Donald Trump to a proposed Columbia satellite campus on undeveloped land in his Riverside South development, along the Hudson River near Lincoln Center. The plan was negotiated by trustee Alfred Lerner as a solution to Columbia's space constraints on its Morningside Heights campus, with plans for the Business School and the performing arts division of the School of the Arts to move to the new campus. When Lee Bollinger became President of Columbia in 2002, he nixed the plan and set his sites on nearby Manhattanville for a site instead. 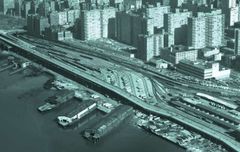 Columbia Prime would have encompassed the southernmost three blocks (59th to 62nd Streets) of a 77 acre site along the West Side Highway that stretched to 72nd Street, finally ridding Trump of the final piece of a project he had been entangled in for over a quarter of a century.

In 1974 Trump bought rights to develop the 77 acres of the Penn Yards, a barren stretch of land alongside the elevated West Side Highway from 59th to 72nd streets on the west side for $10 million dollars. He was unable to obtain financing and his option expired. In 1985, he bought the rights again, this time from an Argentine developer who had gotten approval for a 7.3 million square foot development, but like Trump failed to obtain financing, for $117 million, and proposed an 18 million square foot complex called Television City anchored by NBC and a 157 story skyscraper. NBC eventually backed out of the deal and in order to satisfy critics, the project was scaled down twice over the next 5 years, and in 1989 Trump agreed to a proposal championed by a group of six civic organizations (Municipal Art Society, Natural Resources Defense Council, New Yorkers for Parks, Regional Plan Association, Riverside Park Fund, and Westpride) called Riverside South that proposed a residential development with the previously approved footprint of 7.3 million square feet. Though the project was approved in 1992, Trump faced personal bankruptcy and in 1994 the bank that financed his purchase of the property forced its sale to asian investors who chose to keep him on as a construction developer with promises of a cut of profits when the project completed. The new investors did not get financing to begin construction until 1997, though.

Enter Columbia. In search of space to grow, Columbia considered farming out some of its self-contained graduate schools to free up space on the Morningside campus. One possibility was to acquire land not under development as part of Riverside South. Negotiations were conducted by trustee Alfred Lerner, but he fell ill, and the deal stalled. When President Bollinger came to power in 2002, he chose to look closer to home for growing space.

In 2003 Columbia announced its intentions to develop a campus 5 blocks north of its main campus in Manhatanville. In 2005, The undeveloped property sourth of Riverside South was sold to the Carlyle Group and the Extell Development Company for over 1 billion dollars.

In 2010, Trump responded to a feature in The Eye that reflected on Bollinger's tenure at Columbia, calling Bollinger a moron and terrible leader for failing to follow up on Lerner's vision, and build "one of its finest and most spectacular campuses anywhere in the world... It would have given Columbia large acreage, fronting the Hudson River between 59th and 62nd Street directly behind Lincoln Center." Of course, he conveniently left out the fact that he had failed more than once to develop the land himself over a nearly 30 year period and had been nearly bankrupted in the process. He also failed to mention that the property didn't really front the Hudson so much as the elevated West Side Highway and the IRT Powerhouse, while Lincoln Center's pathetic rear entrance on Amsterdam Ave was not so much directly behind the land as located over an avenue block away.

No matter, Bollinger responded noting that he was happier having purchased more land for less money closer to campus.

There are a number of curious possibilities worth reflecting on had Columbia moved. For starter's the IRT Powerhouse bounding the entire southern edge of the property is a landmark building designed by McKim, Mead, and White. The move would also put a Columbia campus back in proximity with Roosevelt Hospital, where Columbia's medical school used to be and which used to be Columbia's affiliated hospital until Columbia decided to work with Presbyterian Hospital instead to build one of the first purpose built university medical centers in America in Washington Heights. Furthermore, it would have put Columbia two blocks away from the Juilliard School, which had once been resident on Morningside Heights where the Manhattan School of Music is now located.