From WikiCU
(Redirected from Columbia Shield)
Jump to: navigation, search 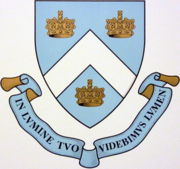 The current "official" design, according to the university visual identity guide.

The University Shield is a symbol associated with Columbia that was introduced in 1949. The shield is technically not a "coat of arms", and the University does not in fact have one.[2] There are very few official uses of the shield these days except on bookstore merchandise, and the podium used for public events like Commencement.[3][4] The shield at times had been used by individual schools, such as the Law School, and appeared on some team uniforms, such as the soccer team, among other uses. Its use is technically regulated by the Secretary of the University.[5] The University has recently decided to adopt as an "official" version of the shield a version that leaves little of the original design unchanged.[6]

Not counting modern variations on the King's Crown, the shield is the most recent symbol adopted by the University. Columbia officials unveiled the new symbol on February 10, 1949. It was designed by Milton Halsey Thomas, then curator of Columbiana, Phillip M. Hayden, then Secretary of the University, and Harold H. Booth of Trenton N.J., a specialist in heraldry.[7]

As adopted by the trustees in 1949, the design consists of a blue shield, a white chevron, and three gold crowns. Heraldically it's described as "Azure (blue), Chevron Argent (silver), Three Crowns Or (gold)." The blue and white colors were drawn from the traditional school colors (which in turn were drawn respectively from the Philolexian and the Peithologian Societies.) The shield-with-chevron design was a nod to the coat-of-arms of Samuel Johnson, and the crowns an allusion to the original Crown of King's College.[8] An optional ribbon (sometimes blue in color) below the shield bears the school motto.

In some older illustrations of the shield, a lions head in profile (a "crest") facing left with tongue stuck out is above the shield on a torse. This is another nod to the Johnson family coat-of-arms, which had three such lions heads (instead of crowns) on its shield. The GS shield incorporates one of these lions heads onto its shield design, and an original sketch for the GS shield copies the lion from the Johnson coat directly. A sketch of a SEAS-specific shield design located in the Archives replaces the lower crown on the shield with crossed hammers.[9].

Coincidentally, the design bears a little similarity to the Oxford shield, with its three crowns. Interestingly, the second President of King's College, Myles Cooper, was an Oxford-educated priest who envisioned King's College as the first university in North America with the other colonial colleges being placed under its aegis in the mold of Oxford and Cambridge and their constituent colleges.

The design of the shield has evolved in its 60 year history, although it is difficult to establish a clear timeline of changes.[10] At some unknown time subsequent the introduction of the original design, a modified version featuring a slightly more tapered shield, curlier scroll, and slightly exaggerated crowns with a lion's head crest atop a torse above the shield appeared and at the very least saw heavy usage in yearbooks starting in the 1960s at the latest. Later, but no later than 1988, a new version of the original design came into use where the crowns on the shield were changed from their original 'in-relief' design to the first generation of the "modern" King's Crown.[11] Representations of this version are extremely rare (one example is on the transom window above the entrance to Miller Theatre on Broadway.) The next version of the shield was effectively the same except the crown had once again been changed, this time to the second version of the modern crown design (flattened outter half-arches of the crown rather than with 'bumps' for ornamentation).[12] An alternative version of this design is missing the shadowing on the scroll below the shield. At some point a variety of shield versions featuring the two current official university crown designs began appearing. This development appears to have been ratified in Columbia's Visual Identity guide, which adopted as the "official" design a version of the shield with white versions of the modern "official" King's Crown design, a straightened out ribbon and text on a smooth (as opposed to curly) curve below the shield, and a royal blue background with Columbia blue chevron.

One of the shield's purposes was to serve as a loosely regulated but official ornamental symbol of the school, since the University Seal, Columbia's oldest symbol, was and still is reserved for purposes of symbolic legal authentication. An informative leaflet states that "The design of the shield is the copyrighted property of the University, and while general permission to reproduce it is freely given, any debasement or undignified use of it may result in such permission being rescinded. It may be used as a decoration without special permission by graduates and members of the University, and may be reproduced in proper form on stationary, and on jewelry and pottery."[13]

Today the shield is sparingly used even in its officially sanctioned purpose as the "official unofficial symbol" of the school, having been largely superseded by the King's Crown. In fact, the University's Visual Identity guide discourages its use, recommending the use of the crown instead.[6][14] While it has regained some popularity on the bookstore merchandise, there is little consistency in design usage, with the new "official" design as well as older designs (and a number of variations of uncertain origins on both) appearing interchangeably, while use of the original design is exceedingly rare.