From WikiCU
(Redirected from CUMB)
Jump to: navigation, search

Columbia University Marching Band (CUMB), also known as The Cleverest Band the World (tm) was formed in 1904 and was one of the oldest student groups on campus, and the perpetrator of one of Columbia's only traditions, Orgo Night. During games, they tend to please the crowd by playing songs and cheers. During halftime, when everyone is attentively engaged, they perform the witty scripts that they write. They also like to make ridiculous Youtube videos and get into trouble. 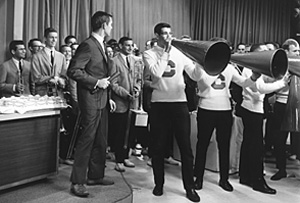 In September 2020, over a few short weeks, the CUMB suffered what appeared to be a fatal publicity blow. After the first anonymous confession, a slew of submissions on the Facebook page Columbia Confessions accused the band of promoting stealing, sexual misconduct, binge drinking, and other storied sins. This resulted in the band ultimately announcing its dissolution.