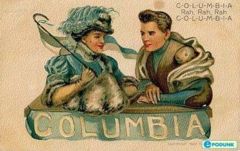 Imagine yourself looking like this as you sing these songs.

Columbia has a number of School songs. You probably don't know the words to most (or all) of them. That's OK. You have this page.

In the United States "Alma Mater" is the term for a school song or hymn (it is also colloquially used as a general term for the school from which one graduated.) Columbia University's official Alma Mater is "Stand, Columbia." Some individual schools have their own songs, most notably Columbia College ("Sans Souci.")

The term "Alma Mater" literally means "nourishing mother". The motto (and original name) of the University of Bologna (the oldest continually operating university in the world) is Alma Mater Studiorum ("Nourishing Mother of Studies"). Of course, in the Columbia context, Alma Mater almost always refers to the Daniel Chester French sculpture that graces the steps to Low Library,

Stand, Columbia is the official University alma mater. Written by Gilbert Oakley Ward (CC 1902) as the Class Ode for the Class Day ceremonies in 1902 to the tune of the "Austrian Hymn" (Haydn's Emperor Quartet, which also serves as the melody for the German national anthem, both with the old lyrics of "Deutschland über alles" and the present less jingoistic version beginning "Einigkeit und Recht und Freiheit").[1] It became at some point thereafter the official song of the University.

Note that the song actually has three verses in the original, but the middle verse about "mighty patriots" and "warriors" is largely absent from performances. Today the song is traditionally performed at University events such as the Baccalaureate Ceremony and University Commencement, as well as various alumni functions.

Sans Souci (french for "without cares" or "carefree") is the Columbia College Alma Mater, composed by Percy Fridenberg CC 1886. Fridenburg composed the song around 1888 while studying medicine in Germany, basing it on a drinking song (the first two verse's are Fridenburg translation of the german, and the third his original contribution to the song).[2] The song was first published in the "Columbia College Song Book" in 1896 (giving it its original copyright date), and by accounts it became quite popular, serving as the de facto school song of the College as far as students were concerned. In January of 1948, noting crowds at basketball games seemed to lack a go-to college song to express their school pride (and noting that the semi-official "Alma Mater" - possibly a reference to the song composed for the Glee Club by its director Walter Henry Hall in 1922[3] - had failed to catch on with students), the Spectator recommended that "those who decide such matters" should enshrine "Sans Souci" as the official school song, as it was popular among students and was effectively "the" Columbia song in all but name.[4] Spec would go on to note that Sans Souci was a "far warmer" and "far more pleasing to hear" song than the "un-singable" "Stand, Columbia." The following fall, Student Board took up the call, approving "Sans Souci" as the official school song, and calling on the Alumni Association of Columbia College and the College's Committee on Instruction to ratify the selection.[5] Apparently, sometime between the end of 1948 and Class Day 1949 they did, and Class Day was graced with a performance of "Sans Souci" instead of "Stand, Columbia" for the first time.[6] Coincidentally, 1949 also marked the adoption of another Columbia symbol, the University Shield.

Today "Sans Souci" is performed at Columbia College associated events, e.g., Class Day, alumni functions, the Alexander Hamilton Medal dinner, and the John Jay Awards for Distinguished Professional Achievement. The CUMB can be seen performing the song at the conclusion of each football game, with the football team gathered in front of them, and on Orgo Night, the performance traditionally ends with the underclassmen members of the band singing "Sans Souci" to the seniors, who stand together on the steps of Furnald Hall.

Roar is Columbia's fight song and over time has become the song most closely associated with the school. When the Columbia University Alumni Federation offered up a prize for a new football song in 1923, Corey Ford CC '23 re-purposed a song from that years Varsity Show (which he co-wrote), and "concocted new words for the final chorus of the show and sent the entry in." Thus did "Bold, Buccaneers!" become "Roar, Lion Roar!"[7][8] In addition to crediting Ford for the lyrics, songbooks credit Roy Webb CC 1910 and Morris Watkins CC 1924 for the melody.

Today the song is almost always performed without the first stanza. Note that while the song refers to a "Lion" in the singular, it has become fashionable for certain administrators (notably Dean James Valentini) to quote the opening lyrics in the plural ("Roar, Lions, Roar") when signing off to the Columbia community.[9]

Who Owns is a popular self-aggrandizing cheer. The cheer is actually derived from a song titled We are the Stuff which appears to have made its first appearance in print form in the 1904 "Columbia University Songs" book.[10] "We are the Stuff" has three verses in the question and response format familiar to those who know "Who Owns", asking (and responding) in turn: "Oh, who are the stuff?" ("Why, we are the stuff!"); "Oh, who's going to win?" ("Why, we're going to win!"); and "Oh, who'll own New York" ("Why we'll own New York!"). While the lyrics of the current shortened version of the song are interpreted as a reference to Columbia's historic position as one of New York City's largest land owners, the original verses suggest that "owning New York" was possibly intended as another reference to who will win the game (and securing bragging rights), as opposed to a boastful promise to engage in a real estate buying spree at some undetermined point in the near future.

In addition to serving as a cheer, the CUMB uses "Who Owns'" five-note opening as a musical fanfare.

Stand Up and Cheer

Stand up is a short cheer/song that the band will often play during breaks in action. The song was originally written for the University of Kansas in 1909, but has since been adapted as a fight song by a number of schools.[11]

Many songs have amusing and/or lewd alternate lyrics, often created and perpetuated by the Columbia University Marching Band. These lyrics poke fun of other schools, as well as Columbia (and of course Barnard.) In accordance with band tradition, allegedly, alternative lyrics are never written down, but rather passed on as oral tradition. Of course from time to time some get printed anyway.[12] They're typically reserved for the band bus and get busted out at the end of Orgo Night. Hang around bandies if you want to learn them.

Sometimes singing alternative lyrics can get you in a lot of trouble. In 2011 Columbia made national sports news when the Athletics Director banned the band from football games after they sang the alternative lyrics "We always lose, lose, lose; by a lot, and sometimes by a little" to the tune of "Roar" at the end of a game where the team fell to 0-9 on the season.[13]

Songs of a Bygone Era

Casual recreational singing was probably a lot more popular in the early twentieth century than the twenty-first. While knowledge of school songs today barely extends past "Roar", early twentieth century Columbians sang a lot more. While some popular songs remain with us (Roar, Sans Souci, Stand Columbia, Who Owns, and Stand Up), many which apparently enjoyed great popularity back in the day remain unsung today. Examples include the Columbia Marching Song,[14] the Columbia Drinking Song,[15] the Columbia Quadrangle Song, Evening on the Campus, Van Am, and the Columbia Medley.[16] The college song books are also filled favorite tunes from the Varsity Show.[17] Not only did the era prove fertile for composing new songs, but the singing culture gave birth to competitions like the inter-class Notes and Keys Cup, and later on, the inter-fraternity Francis Wayland Shepardson trophy.[18]

Unfortunately it's not all fun and games, as some of the pieces collected in the songbooks, especially some of the non-columbia-specific 'general campus songs', feature racial caricatures and slurs.

Columbia musical groups have occasionally recorded their work, and sometimes they include Columbia songs. The following Columbia records are known to have school songs:

There are definitely some interesting recordings of Columbia songs floating around, though they don't seem to have been formally cataloged anywhere. For example, WKCR has a Dixieland jazz style recording of the "Roar" melody it uses after broadcasting games.[25] Similarly, whoever coordinated the Last School Standing competition in 2004 during Columbia 250 got their hands on some old recordings of songs to play over the Roone Arledge Auditorium sound system before the show.

These aren't really "Columbia" songs, but they do feature Columbia in some way or form.

Tom's Diner is an a cappella song written in 1982 by Suzanne Vega. It captures a dreary morning scene inside Tom's Restaurant.

Hey There Delilah is a love song written for Columbia alum Delilah DiCrescenzo.

"Campus" is a song written by alternative band and Columbia alumni Vampire Weekend. It is somewhat of a love song, but mostly describes day-to-day life on campus for a hipster, with ironic lines like "spilled kefir on my keffiyeh".