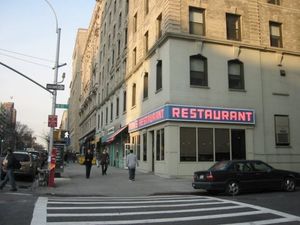 Tom's Restaurant is a famous diner on Broadway at 112th St.

It is internationally renowned as the "Seinfeld Diner", because the exterior was used on that show. The interior was not, and is very different from that seen on the show. There is a portrait of Michael Richards's Kramer on the wall above the counter. It is not correctly referred to as "Tom's Diner", despite the Suzanne Vega song by that name about this very restaurant.

Barack Obama ate some breakfasts here during his first semester at the university. John McCain was also an enthusiastic patron when his daughter Meghan was studying at Columbia.

Tom's boasts the best grilled cheese and the best milkshakes in the neighborhood. In fact, anything but the milkshakes will clog up your arteries. Nevertheless, many go because it's a good place to chill when you're not very sober at 2am. Also, the food is dirt cheap and screams "diner". On Sunday mornings, stay away because the place is packed with tourists. Bwog did a field study at Tom's in April 2012.