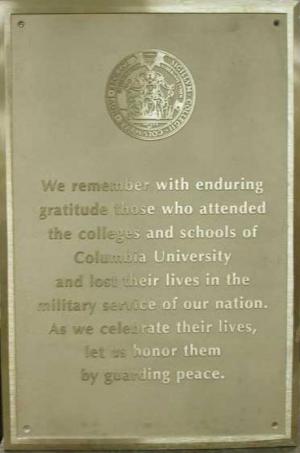 The Columbia University War Memorial is a plaque located in the lobby of Butler Library. Unveiled on December 12, 2008, The memorial was donated by an alumnus after controversy that Columbia did not have a war memorial dedicated to its affiliates who have died in battle. Several memorials do exist honoring the deaths and service of Columbia alumni, but they all honor individual conflicts or branches of the armed services.

The memorial is complemented by a website listing Columbia's war dead and detailing its participation in all the armed conflicts following the French and Indian War. It also includes a tour of the older war memorials on campus - although notably absent from the site at first was the conspicuous First World War memorial in JJ's Place (it's since been added).