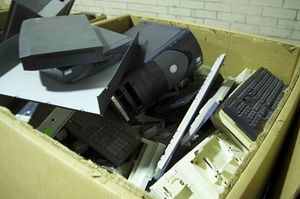 The computer graveyard, via Bwog[1].

The computer graveyard is a recycling area used by CUIT to dispose of broken and/or old computers, monitors, printers, and various other computer components. An electronics recycling service comes regularly to clear it out.

The graveyard can be found below the Dodge Fitness Center and can be found by continuing downward on the stairway connecting Dodge to campus level. Continue through the Grove tunnel towards Amsterdam Avenue and the computer parts are located in large cardboard bins on the right, just past the old power plant entrance.

Anyone's allowed to grab whatever they want, since the items are being thrown away. Useful if you want to grab a few crappy computers and build a cluster.

There have been many sightings of the IBM OS/360, which according to legend wanders the graveyard during the night, looking for souls to which it can add complicated and unnecessary features.

There is also a copy of the E.T. video game for Atari somewhere in there. Probably.