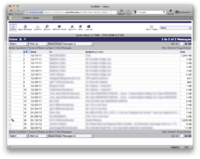 Screenshot of a CubMail inbox from March 2012

CubMail is Columbia's webmail program. The name is a reference to a baby Columbia Lion, in case you couldn't figure that out.

A better alternative is to use Gmail to send and receive email from your Columbia.edu address.

In 2012 CubMail grows up and is replaced by LionMail, using Google's App hosting so it's just like gmail or gBear Mail.