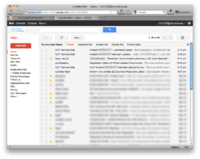 Screenshot of a LionMail inbox during the March 2012 Pilot Phase

LionMail is the replacement for CubMail. It uses the Google Apps program, and appears nearly indistinguishable from gmail. Note that as of March, 2012 LionMail does not offer Google Docs,

In March 2012 CUIT began rolling out the service first to a handful of pilot users, then in several phases (Phase one, early April 2012, was 1,000 undergraduates). The goal is to move all undergraduates to LionMail by the end of 2012.