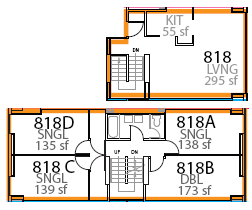 An East Campus exclusion suite or ECX suite is a particular type of 5-person suite in the high-rise part of East Campus. Entrances to ECX suites can be found on every even-numbered floor from 8 to 20. There are 8 such suites per floor.

As of 2012, exclusion suites are part of the standard housing selection process and no longer have age-based requirements.

All the suites are identical. They have two floors. On the entry (even-numbered) floor, you can find:

A staircase leads down to a lower floor where you can find:

Most ECX suites are occupied by 3 seniors or juniors in the singles and 2 sophomores in the double. Occasionally 1 or 2 juniors live in the double because they desperately want to live in a suite rather than Broadway, Schapiro or Wien. Even more rarely, a group of 5 seniors will take an ECX suite either in suite selection or senior regroup. Thus, 2 seniors end up in an ECX double. Most seniors find this highly undesirable because the double is only 173 sq ft. By comparison, some seniors live in singles of 170 sq ft.

Once upon a time, groups could invoke the EC exclusion rule, which allowed groups that were attempting to live in an EC Exclusion suite to drop (exclude) the lowest two point values from their group, thus raising their point value. This meant that ECX suites usually only went to groups of three seniors and two sophomores (thus having an ECX group pt value of 30).

In 2011, the rule was removed by the Housing Advisory Committee for two primary reasons. The first is that the inclusion of the EC Exclusion Rule in the Room Selection process adds an additional (and complicated) step, both to registration and the actual selection process. This was found to create a great deal of confusion amongst the student body as well as creating a lot of additional work for the Housing staff. The coding required on the back-end of the Housing Portal to allow for the EC Exclusion rule was the single source for many of the Portal's problems.

The second reason for the removal was that its purpose had been served and it was no longer effective. The rule was created in the 1980s when East Campus first became an undergraduate residence hall. The 5-person highrise suites with a double (later to be known as Exclusion Suites) were highly unpopular. In order to create an incentive for students to live in these suites, the Exclusion Rule was created so that rising sophomores could occupy the otherwise unwanted double in each suite. However, since EC is now the most popular residence hall, the need for the rule is no longer present. Groups consisting of 3 seniors and 2 sophomores will still occupy the majority of the exclusion suites--they will just do so with a point value of 22 instead of 30.