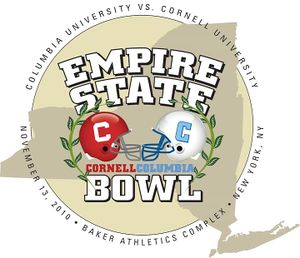 The Empire State Bowl has been the name of the annual Ivy League football game between Columbia and Cornell since 2010. Although the schools have played a football game against each other for decades, no one thought to make it into a marketing opportunity until 2010. Perhaps the schools should also lobby to have the fixture scheduled for the last weekend of the season, the traditional "rivalry weekend" in the league, when Harvard plays Yale, and Penn plays Princeton - Cornell and Columbia are currently paired with Dartmouth and Brown, respectively.

After six years, the series stands at 4-2 in favor of Cornell. In the initial four encounters the home won. The series has produced some memorable games, including a shootout in 2011 that produced a basketball game scoreline with 103 total points scored, and three furious Columbia comebacks: one where Columbia scored 17 unanswered 4th quarter points, including a diving touchdown with 37 seconds on the clock, to overturn a 14 point deficit in 2010, another when Columbia scored 24 unanswered second half points to overturn a 7 point deficit in 2012, and an unsuccessful bid in 2014 where Columbia scored 27 unanswered points to overturn a 21-0 scoreline before succumbing 30-27.