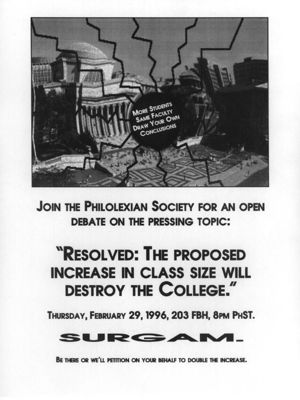 Students didn't think this was such a great idea.

Enhancing the Undergraduate Experience at Columbia was a report issued by the administration in February of 1996 describing planned changes and enhancements to Columbia College as part of then-President George Rupp's avowed goal to place the College at the center of the University. Of course "enhancements" is a euphemism for increasing enrollment in the College from 3,500 to 4,000 over a 5 year period. This continued a long tradition of expansion recommendations, such as one made by faculty 35 years earlier in 1960 at the direction of then-Dean John Gorham Palfrey.

The general findings presented in the report were initially presented before the Executive Committee and Chairs of the Arts and Sciences on December 19, 1995. A request for a written report with greater detail resulted in this report 2 months later.