From WikiCU
(Redirected from Feniosky Pena-Mora)
Jump to: navigation, search 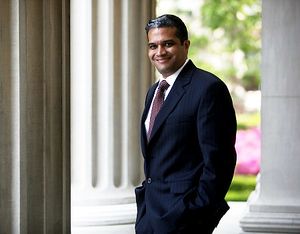 Feniosky Peña-Mora was the fourteenth Dean of SEAS and the Morris A. and Alma Schapiro Professor in the Faculty of Engineering. He is affectionately referred to as Feni by PrezBo.[1]

At his September 1, 2009 welcome address to incoming students, Peña-Mora reinstated the Columbia tradition of handing out the beanies to 300 first-year engineering students, a tradition which he continued each year.

In 2011, Peña-Mora's reputation suffered in the wake of a faculty letter of no confidence expressing extreme discontent with his leadership with the school.[2]. In the summer of 2012, Peña-Mora resigned as the dean of SEAS, whereupon Professor Donald Goldfarb stepped in to serve as interim dean.

Professor Peña-Mora spent the previous six years at the University of Illinois, where he was the Edward William and Jane Marr Gutgsell Endowed Professor in the Department of Civil and Environmental Engineering, a Center Affiliate at the National Center for Supercomputing Applications and a Faculty Affiliate at the Beckman Institute. He earned a Master of Science (MS) degree in Civil Engineering and a Doctor of Science (ScD) in Civil Engineering Systems from MIT. Before joining the University of Illinois in 2003, Professor Peña-Mora worked at MIT as Assistant Professor and Associate Professor of information technology and project management in the Civil and Environmental Engineering Department. He has also served as a visiting professor at Loughborough University in Great Britain and at the Ecole Polytechnique Fédérale de Lausanne in Switzerland.

Professor Peña-Mora’s research interests include information technology support for collaboration in preparedness, response, and recovery during disasters involving critical physical infrastructures, such as the 9/11 terrorist attack and Hurricane Katrina. He has also worked on problems of management of large-scale civil engineering systems.

Professor Peña-Mora is the author of more than one-hundred publications in refereed journals, conference proceedings, book chapters, and textbooks on computer-supported design, computer-supported engineering design and construction, as well as project control and management of large-scale engineering systems. His publication, “Design Rationale for Computer Supported Conflict Mitigation,” received the 1995 award for best paper published in the American Society Civil Engineers’ (ASCE) Journal of Computing in Civil Engineering. He is also the author of an influential textbook, Introduction to Construction Dispute Resolution (2002).

Professor Peña-Mora is the holder of the 1999 National Science Foundation CAREER Award and the White House Presidential Early Career Award for Scientists and Engineers (PECASE). More recently, he has won the 2007 ASCE Walter L. Huber Civil Engineering Research Prize. In 2008, he was recognized with the ASCE Computing in Civil Engineering Award for outstanding achievement and contribution in the use of computers in the practice of civil engineering.

Professor Peña-Mora also has extensive practical experience in the fields of engineering and applied science. He is a professional engineer registered in the Dominican Republic and has been a key figure in a variety of international projects. He has founded high-tech startup and consulting companies and has worked with both the construction industry and governments in various countries, including Argentina, Colombia, the Dominican Republic, Puerto Rico, and Japan.