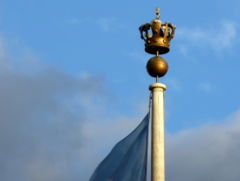 The top of the Class of 1881 Flagpole

There are 8 Flagpoles of significance around Columbia's Morningside Heights campus, though most students only pay attention two of them.

The flagpoles on each of the South Fields hold a place of distinction in the consciousness of many students. They're used to signal whether or not a field is open for use. Green means 'Yes', Red means 'No'. Due to the fact that the Green flag almost never flies, it's probable that you'll ignore the flags anyway. Of course the flags are meaningless for most of the year when the lawns are covered in tarp to protect the grass so that it's in impeccable shape for Commencement, at which point they'll be covered with seating for 40,000. Facilities now maintains a "South Lawn Status" website.

Low Library is flanked by two eighty foot tall flagpoles. On the west side is the pole donated in 1898 by the Lafayette Post of the Grand Army of the Republic, topped with a gilded eagle. It flies the US Flag. On the east side is the Class of 1881 pole, presented as a 25th anniversary gift in 1906 and topped with a gilded replica of the King's College Crown.[1] In 1921, the Class of 1881 made a 40th anniversary gift of a $2,000 trust fund for the maintenance of the pole and purchase of new flags.[2]

Donated by an alumnus, three flagpoles stand on Hamilton Lawn and fly flags with the Columbia College crown and other symbolism. At one point the flags were a sore point among engineering undergraduates who argued that they should have visual representation on South Field as well. It was rumored that the request was refused because the alumnus had stipiulated that the poles only fly flags for CC. Eventually the 'controversy' subsided.

The engineers do in fact have their own flag flying on campus. No one other than the engineers ever really see it as it's in the plaza in front of Mudd Hall.